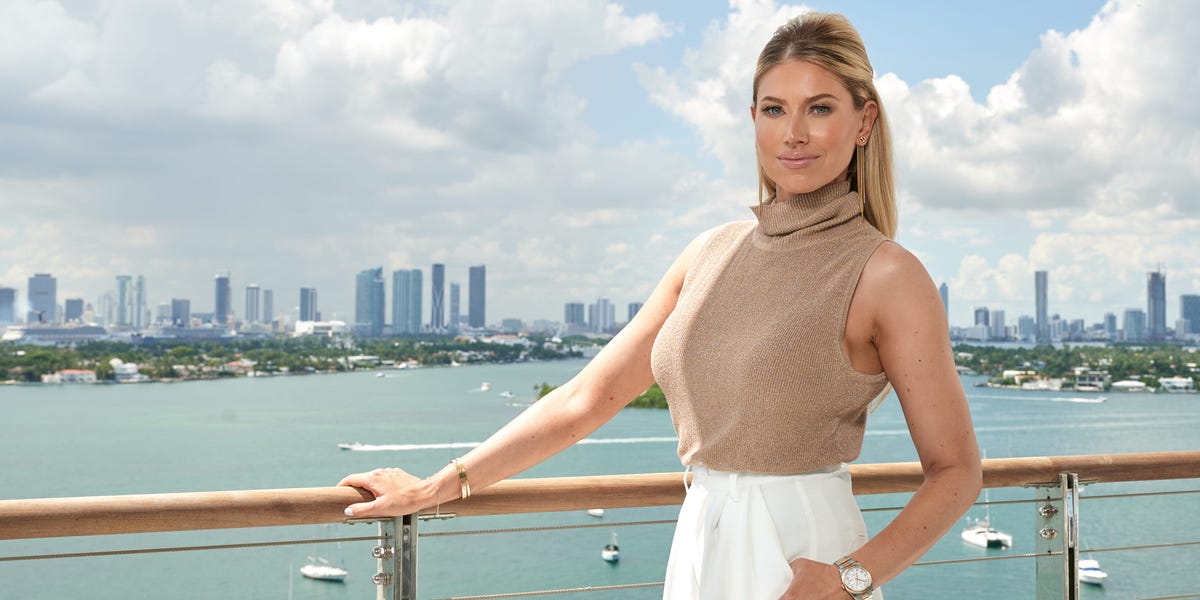 Last year alone, the Douglas Elliman broker amassed $750 million in home sales — making her the No. 1 individual agent in Miami by sales volume, according to RealTrends.

Goldentayer, 39, kicked off her career in 2005, when she moved to Florida from Maryland, where she studied government and politics. Now, she’s selling a mind-boggling number of luxury homes as the Sunshine State takes center stage in popular consciousness.

The pandemic kicked off a boom in Florida’s residential-real-estate market as people from Wall Street types to remote-working millennials took advantage of the ability to work from anywhere and set up shop down South for at least part of the year.

Finance executives, venture capitalists, and crypto investors are lured by the slower pace, bigger homes, tax breaks, and the weather, among other perks. A recent report from the brokerage Redfin found Miami topped the list of the most popular US cities to move to for the last four months of 2021. While most of the Miami movers hail from New York, Redfin said, a large number is coming from California thanks to Miami’s recent investment in technology.

Goldentayer’s clients include hedge funders like the Third Point founder Dan Loeb and the big-shot attorney Bill Carmody, not to mention plenty of celebrities and athletes.

Last year, she sold the boxer Floyd Mayweather an $18 million nine-bedroom mansion with an indoor movie theater and gym on Palm Island, an exclusive neighborhood in Miami Beach. In 2020, she represented the restaurant tycoon David Grutman, who runs the nightclubs Liv and Story, in his purchase of a $10.25 million Miami Beach estate that includes a recording studio.

She’s also a record setter: In July, Goldentayer facilitated the largest land sale in Miami-Dade County. She represented the buyer of a $54,.93 million waterfront 1.8-acre property in Bal Harbour, a lavish village at the northern tip of Miami Beach. The site used to house the Bal Harbour Yacht Club, which has since been demolished.

Goldentayer told Insider she worked seven days a week to keep up with the high demand for Miami-area homes. But Goldentayer finds balance during her working schedule.

“I’ll go all the way, but then I find time to recharge the next day,” Goldentayer told Insider. “That’s how I don’t burn out.”

Sometimes in her pajamas, Goldentayer fields calls and emails from her 4,500-square-foot four-bedroom house on the Venetian Islands — a trio of man-made islands that sit in a scenic waterway between the mainland of Miami and Miami Beach. Goldentayer is often chauffeured from home to home, but she sometimes drives her own golf cart to showings near home. For special occasions, you might even see her arrive at a listing appointment in a helicopter.

She let Insider take a look at a typical day on the go.

Goldentayer wakes up and starts her day with a full glass of hot water followed by green tea — never coffee, which she says makes her crazy. For additional morning peace, she goes through a Pilates routine.

She tends to emails but has a strict no-call policy. “Nobody wants to get calls in Miami before 9 a.m.,” she told Insider.

Her 18-month-old son, Valor, wakes up, so she spends time with him. Goldentayer met her husband, Ilya Panchernikov, a caviar importer, on St. Barts.

The Venetian Islands — where Goldentayer lives — are a hot selling point for Florida newcomers, she said, as younger professionals embrace a lifestyle far from cramped cities.

In what Goldentayer categorizes as a late start for the average agent, she’s normally out the door by 10 a.m. and on her way to listing appointments.

She frequently does not have far to go. She’s sold about 60 homes on the Venetian Islands, which have a limited supply of homes.

“I think it’s natural to sell where you live,” she said. “I’m showing in the Venetian almost daily.”

She’s currently listing 1384 South Venetian Way — a Spanish-style two-story home with a pool and views of the Intracoastal Waterway — for $13.5 million.

Goldentayer recently arrived by helicopter to another waterfront property she represents. In trendy South Beach, 416 W. San Marino Drive is a residential lot soon to be developed into a 6,357-square-foot six-bedroom home by the Miami architect Max Strang.

For many listings on the Venetian Islands, though, she’s arriving by golf cart.

“I don’t have a car and I don’t Uber around. I have a golf cart,” she said. “Clients love it. They really get to experience what makes the Venetian special, so they jump in the golf cart with me.”

For trips too far for a golf cart, she has a personal driver who steers her around in a black Cadillac Escalade, which she calls her mobile office.

She told Insider that anything she would do in an office — except print — she accomplished from the backseat. Calls, texts, emails, and even lunch all take place on the go.

Her office on wheels may take her down to Coral Gables, a city southwest of Downtown Miami where she has a $20.9 million listing with seven bedrooms, a library, and a tennis court. Or the Cadillac may roll all the way up to Indian Creek — aka the “Billionaire Bunker,” where Tom Brady and Gisele Bündchen and other big names own property — to show a $55 million waterfront home soon to be built with 12 bedrooms and 16 bathrooms.

Luxury real estate is in such high demand, Goldentayer said, that she sometimes crams in 30 different showings over two days.

Goldentayer said she worked from home at least one day a week “if scheduling allows.” “I do one day in the office, one day at home, and all the other days, I’m out in the field,” she added.

Goldentayer, who has 83,000 followers on Instagram, regularly posts photos of the luxury homes she’s trying to sell or has successfully sold. She hired a social-media team to handle her page, as creating all of her own content would take a significant chunk out of her day.

Recent posts included an Instagram Reels walkthrough of 29 Indian Creek Island Road — the four-bedroom home that Jared Kushner and Ivanka Trump have been staying in.

Goldentayer has dinner with her family and spends more time with her son. She told Insider she preferred to eat dinner at home.

She gets a box delivered daily from the meal-prep service Catered Fit, which has meals from Brazilian fish stew with tomatoes, peppers, and coconut milk to crispy seitan with spinach and walnut pesto.

Goldentayer returns to work, sending emails to her clients on the West Coast.

“There’s been an influx of very affluent new consumers to the area — we’re being called the Wall Street of the South,” Goldentayer said. “Californians can’t get a U-Haul fast enough to get out of their state. So we’re having such an influx of ultrahigh-net-worth individuals who are moving here, and they want a proper home.”