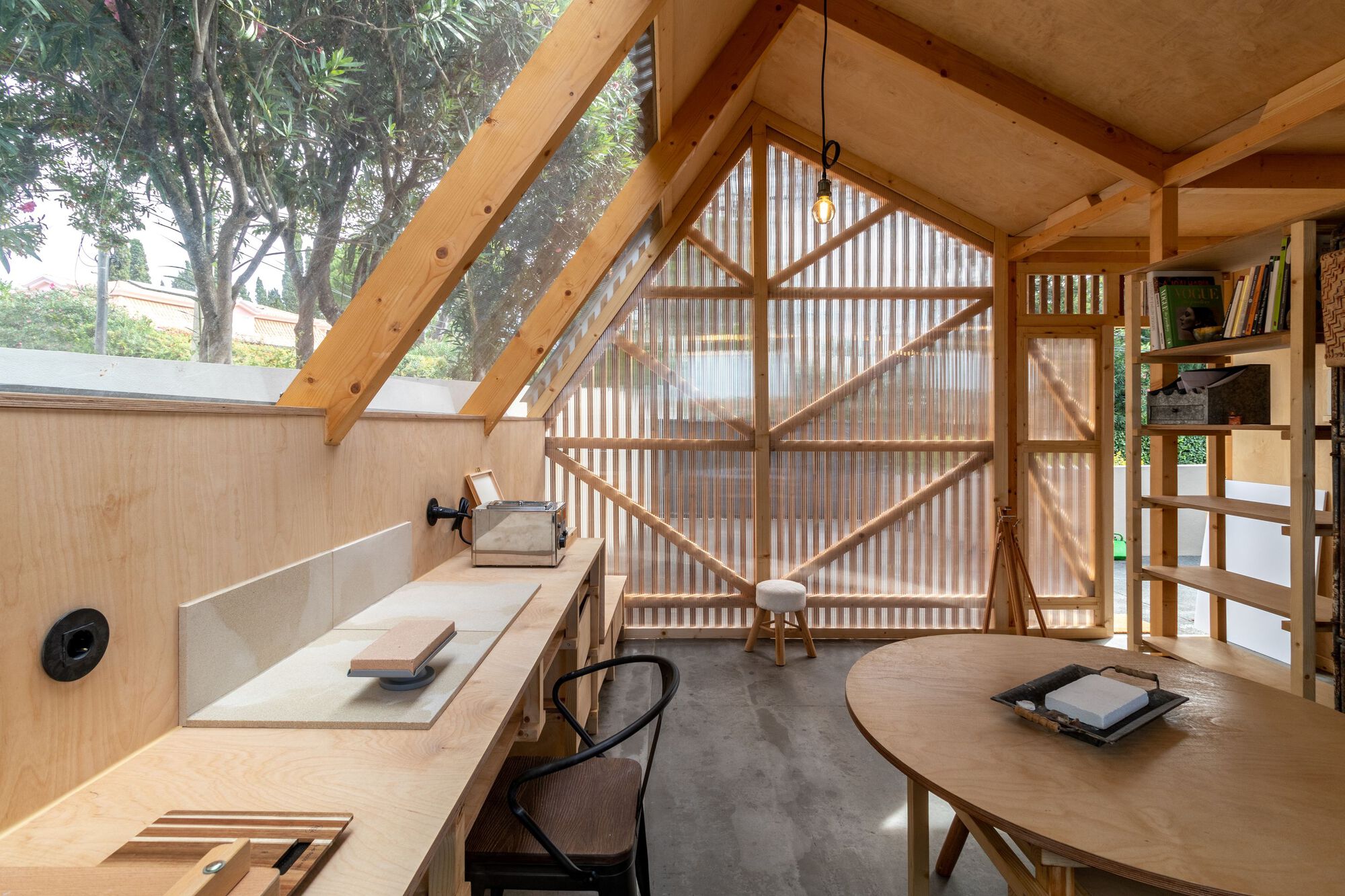 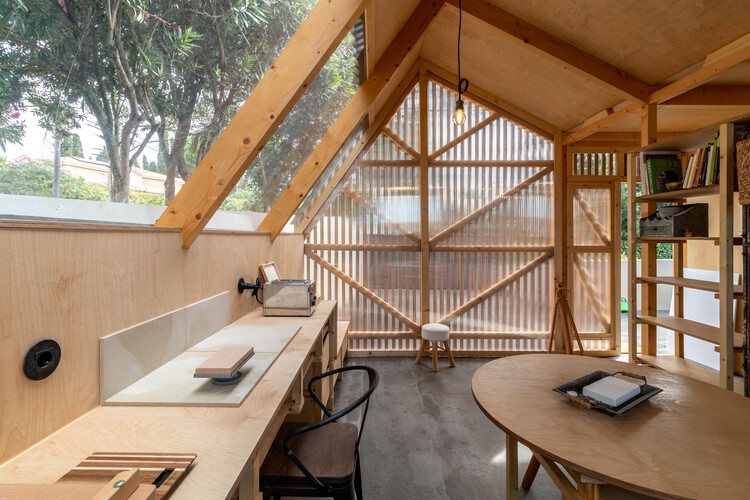 Text description provided by the architects. We were challenged by a Portuguese craftswoman to design and build a ceramic studio adjacent to her house, where there were previously two parking spaces. The artisan carries out research work in several areas, such as ceramics, jewelry, and painting, thus needing a multifunctional space that allows the diversity of tasks associated with her work to be carried out in a fluid and organized way.

In the search for design references, together with the client, it was decided that the Scandinavian concept “Hygge” would be the anchor of this project. “Hygge”, does not have a direct translation into Portuguese. It is something intangible and associated with a state of mind that transmits serenity, shelter, comfort, and warmth. In short, it gives us a pleasant feeling of well-being and appreciation for everyday tasks, when performed in the comfort of a place that you can call home.

Therefore, we tried to explore how the decisions related to the architectural and interior design project, such as form, materiality, view systems, natural and artificial lighting, organization and permeability of spaces, fixed and mobile furniture, relations with the exterior, and integration in the urban context, could be taken with the aim of transmitting the sensations mentioned above and related to the “hygge” concept.

Regarding the general shape of the studio, in the park adjacent to the house, we opted for a flat roof, continuing the roof of the house. In the part facing the neighbor, we opted for a gable roof, which reminds us of the feeling of home and facilitates the flow of the rainwater that would be collected and which allows you to admire the trees from within, making them part of the studio experience.

With regard to materiality, we chose to use spruce wood for the visible structure and birch plywood for the interior walls as well as the furniture. As wood is a living material, it was through the serene dialogue between the different tones, textures, and orientation of the veins of the wood used that we sought to obtain the desired atmosphere and environment. On the floor, we opted for a fiber-cement floor to give it a more industrial look.

When we visited the artisan’s house, to which the studio/atelier would be attached, we verified that there is a constant presence of light and a broad and privileged relationship with the landscape, which is intensified by the large windows in the house. In the studio, we opted, in opposition to the large windows of the existing construction, for a space facing inwards, concentrating all the tension/privilege of this relationship with the landscape (sea and city) in a single element, the circular window that works as an oculus.

On the studio’s entrance facade, we opted for a translucent structure in alveolar polycarbonate that allows diffused light to enter the space, making the space warm and serene at the same time. From the inside, this facade has a wooden structure influenced by the traditional Portuguese anti-seismic structures (“gaiola pombalina”). From the outside of the facade, we opted for a hollow and vertical slatted panel that penetrates the concrete facade of the existing construction, like a parasitic structure, which spreads and ends up being part of a unique system. In this way, from the outside, no separation between the existing building and the new studio/atelier is seen.

Regarding furniture, since the studio/atelier is a space with a huge diversity of objects, tools, and tasks, we chose to design and build the furniture with free installation boxes, which facilitate the space’s arrangement. The furniture structure was, in turn, designed and built with a structure of standardized and repetitive fittings, which give order to the creative process and which dialogue with the rhythm of the structure of the studio. The circular table has the same shape and dimensions as the round window and is the disruptive element that makes circulation fluid and links the various elements present in the studio.