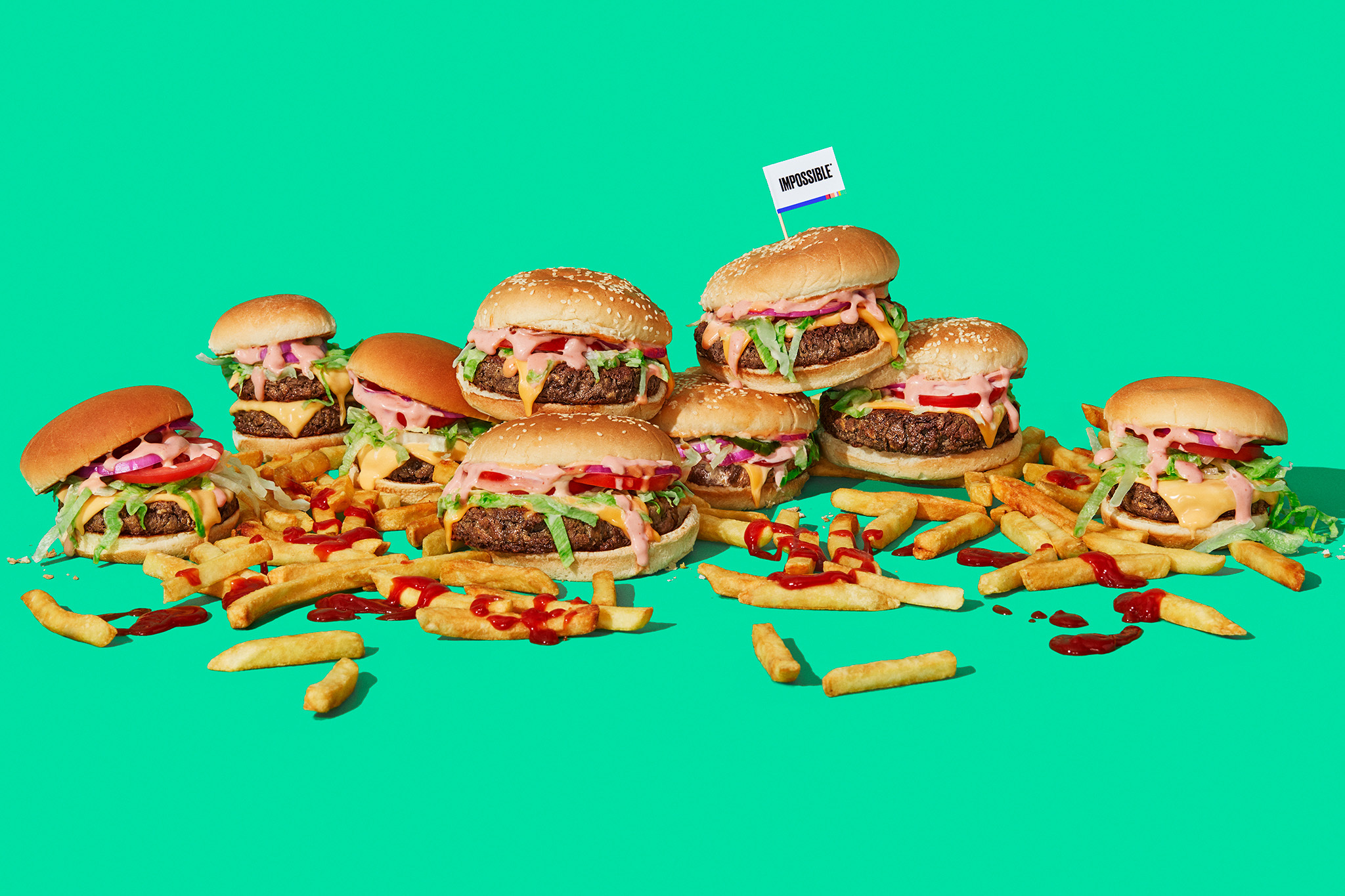 When an email showed up in my inbox this week about Impossible Foods launching the Impossible Shop, its very own ghost kitchen restaurant, I was both intrigued and skeptical.

For one, I’m not a big fan of delivery services like DoorDash and Uber Eats (expensive and ethically dubious). The sterile anonymity of ghost kitchens, or restaurants that exist only to sell food through delivery apps, feels especially like a tech hellscape. And for two, as a long-time pescatarian, the Impossible Burger is somewhat off-putting to me due to its close resemblance to the real thing (why oh why does it need to bleed?).

But occasionally, a non-beef-eater gets curious about all the greasy fast food that carnivores constantly have at their fingertips. So I sucked it up and ordered almost everything on the Impossible Shop menu from a mysterious Oakland ghost kitchen address.

About 45 minutes after I placed my order, a delivery driver pulled up to my apartment and deposited two gigantic orange and purple striped paper bags into my hands. They smelled like grease and fries. They smelled delicious.

To avoid an Impossible Barf from eating the equivalent of six meals by myself, I called in my boyfriend and my colleague Joshua (both meat-eaters) as reinforcements. We began unwrapping my haul: nuggets and fries, a breakfast burrito, a patty melt, a cup of chili and two burgers.

The fries were just OK, but the Impossible nuggets quickly became a hit. Did they mimic the texture of chicken perfectly? No. But the barbecue sauce they came with was delicious, and what are chicken nuggets really but a vehicle for sauce?

The road got bumpier from there. Next, we all tried the “Impossible Pat-B Melt,” apparently named after Impossible Foods’ CEO and founder Pat Brown. All I can say is, sorry to this man. My boyfriend, after chewing thoughtfully for a few moments, came to a jarring conclusion.

This sandwich, a patty melt made with an Impossible Burger patty, caramelized onions, a plant-based cheese sauce, pickles and a “side of Shop Sauce for strategic dunking” was a salt disaster. The already very-salty Impossible burger patty (one is apparently 16% of your recommended daily sodium intake) was taken to accidentally-knocked-the-salt-shaker-over levels of sodium by an overabundance of runny vegan cheese sauce.

Its only saving grace was the “shop sauce” you were advised to dunk the sandwich in, a tangy, creamy respite to the salt assault. Two days after this experiment, when leftovers were mostly gone, the one sad item left was half of the patty melt, which I think says it all.

Next, we tried the breakfast burrito, which was mercifully less salty. The plant-based egg was spongy and odd, but its flavor was well-masked by gloopy smears of both faux cheese sauce and mildly spicy chipotle crema. The chunks of Impossible Sausage were once again a salt extravaganza, but the tater tots, tomatoes and avocado helped balance it out. The ever-present runny cheese sauce was overkill, but it wasn’t awful. I could see myself eating this hungover.

Now, it was time for the chili. When I tell you the serving of chili was comically small, I mean, like, really small. Like baseball-sized. Which wouldn’t be a problem, considering how much other food we got, but Jesus, it was 15 DOLLARS and 49 CENTS. It was the most expensive thing we ordered for absolutely no reason. I mean, no side of fries, no bread, no nothing. Just a tiny-ass cup of chunky brown stuff and your shame. And it tasted … fine (still too salty though).

“The only possible answer is like, so much ‘beef’ goes into it,” Joshua messaged me later, as we contemplated the price of the $15.49 chili. “You can fit so much artificially manufactured beef into this bad boy.”

“That sentence makes me wanna barf,” I replied.

It was time, at last, for the normalest thing on the menu: the “shop burger,” a basic cheeseburger dupe on a brioche bun with an Impossible Burger patty, shredded lettuce, tomato, diced onion, pickles, “shop sauce” and that damned fake cheese sauce once again.

“It’s better than most fast food, but not as good as a real burger at a sit-down restaurant,” declared my boyfriend. Joshua compared its taste loosely to In-N-Out, mostly due to the the tangy “shop sauce.”

As someone who hasn’t eaten beef in 20 years (I tried it once when I was 5, which ended in a bathroom disaster, I’m told), I cannot attest to how the burger compared to the real thing. But in the grand scope of convenient vegetarian delivery foods, it was decent. I still prefer a black bean burger, but I could get on board with this.

While the theme of the Impossible Shop may be “extremely salty junk food I probably wouldn’t order unless drunk,” I appreciate having a drunchie option that’s less harmful to the planet. Even the meat-eaters were almost convinced.

“Honestly, if everything was $5 and three pinches of salt less, it would be a viable alternative to me ordering Shake Shack,” Joshua told me.

My mild sense of goodwill towards the Impossible Shop dissolved shortly after we finished our lunch, though. The piles of grease and sodium set in. I felt completely disgusting. A reminder to us all, I suppose, that just because food is vegan does not necessarily mean it is healthy.