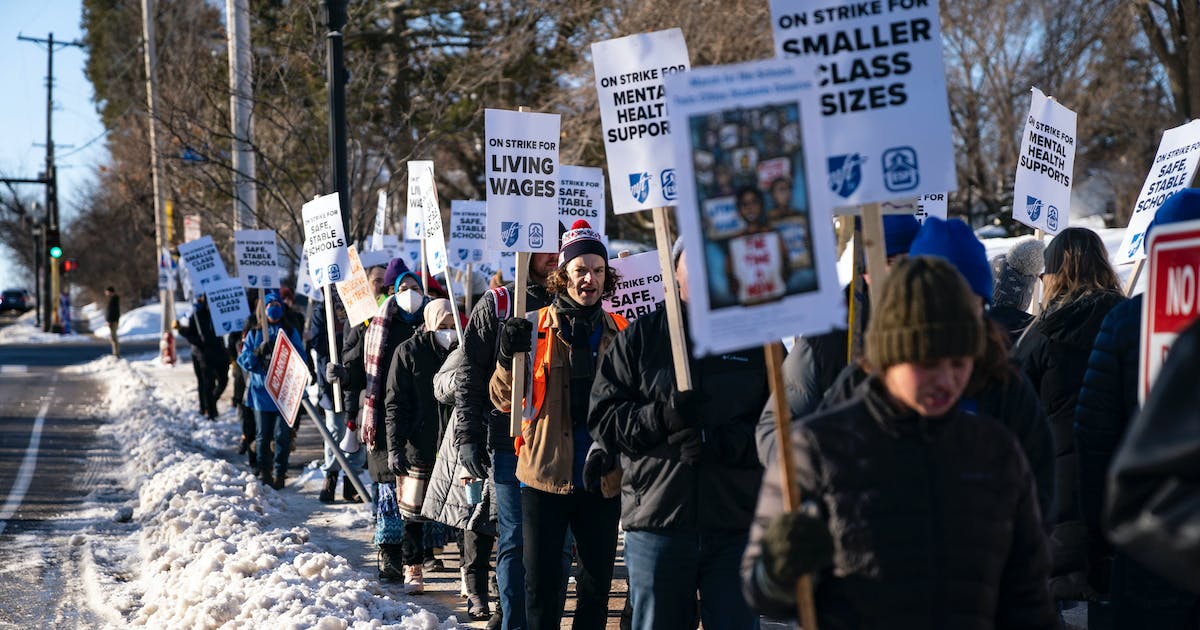 Because I am a retired high school teacher, I have a few questions about the Minneapolis teachers’ strike issues. When I hear that one of the concerns is class size, I absolutely have to ask for specific numbers. It is so easy to accept average class size numbers. Too often people forget exactly what “average” means. A friend of mine has a daughter who teaches (not in the Minneapolis district) whose class size is 40 students! I know some people who are hesitant to walk past a group of five teens in the mall. Depending on the daily number of classes in a middle or high school (which could range from four to six groups per day), do the math and then shudder at the total number of young people a teacher has to teach. In some disciplines, 30 students per class is an overload!

We need more specific information to better understand exactly what the teachers are asking for. Get those numbers from the staff, not the administration.

While I am at it, allow me to address the letter writer who did some math and calculated teachers’ hourly wage. Simply put, that is a false conclusion. When I was teaching English classes, I had homework every single day. I was thrilled at getting a key to the building where I could access my classroom on weekends so I could prep where my materials actually were. My husband often commented I should have taught something else so I didn’t have so many papers to read and grade. Teachers work on contracts, which means if it takes more than 40 hours per week to do the job, you work those hours without compensation. Teaching is not a nine-months-per-year job. Simply put, we pay rent/mortgages for 12 months; eat more often than for just nine months per year and stretch our dollars just like everyone else. Yes, teaching is not a profession to get rich, but it is a profession with well-trained people who deserve more than a paltry wage. Getting to hang out with truly awesome youngsters is great, but we can’t deposit them into our checking accounts.

I opted to retire early because the homework load was killing me. And I never had to deal with the horrors of teaching during COVID-19! What will our education system look like if we continue to treat teachers as expendable? It isn’t a healthy picture.

The president of the Minneapolis Federation of Teachers gave a speech last week where she said, “Our fight is against patriarchy, our fight is against capitalism, our fight is for the soul of the city.” As a former teacher I believe in higher pay for support staff because they are crucial to successful schools. But these comments against capitalism are ridiculously naive. Where does she think that government tax revenue supporting public programs and education comes from? Much of it comes from taxes on business profits and on income from individuals who work for businesses. Our system of democratic capitalism is the best in the world, and it’s sad that more people don’t understand this.

I’m proud to be a Minneapolis Public Schools parent in these historic times. We haven’t always been an MPS family, even though I am an MPS alum, because we opted in to a private Montessori school instead. After being in MPS for a mere six months, I realize that being a private school family opting out of the public schools meant not only the district missing out on funds from our enrollment, but that we were opting out of really important conversations about equity. I now understand that as a school-age family, we are part of a larger system that has real impact on perpetuating inequity and injustice and that we have an important role to play in advocating for an education that is truly serving all children, not just our own. I encourage all families of privilege enrolled in private schools to consider how you can join the conversation to fund public education.

I applaud Jacob Hanson’s March 14 commentary regarding the disappearance of America’s grasslands and efforts to restore grassland resources (“Our grasslands need protection now,” Opinion Exchange). Hanson is spot on as he points out benefits grasslands provide to wildlife and for carbon sequestration, among others.

He didn’t mention the financial windfall that out-of-state hunters like myself bring to South Dakota. I’ve hunted South Dakota pheasants for years, and I’ve watched bird numbers decline drastically in recent years. From everything I’ve read, habitat is critical to restoring pheasant numbers.

Cattail marshes are an important part of the grassland biome. Wherever wet or moist soils occur, cattails take over and provide important habitat. As South Dakota suffers through this ongoing drought, I’ve been sad to see cattail marshes that ring thousands of small prairie potholes mowed down as ranchers seek fodder for their cattle. What was once great pheasant habitat has disappeared as the potholes get mowed to the water’s edge.

I understand that ranchers need food for their cattle, and to survive this drought they’ll take desperate measures to keep their cattle alive. Rightfully so. My point: If South Dakota wants to continue to claim it is the pheasant capital of America, then it needs to put up money to protect grassland habitat. Why not pay farmers to not mow every acre of cattail marsh? Pay farmers for their part in helping protect pheasant habitat. That will give farmers cash to buy feed and hunters habitat for pheasants.

With the rapid explosion of motorized trails in the state and the millions allocated to it, we must pass the 2003 legislative audit recommendation that off-highway vehicle projects be a mandatory review category. Auditors noted the potential for significant environmental damage and the need for public transparency.

Old hands know that it is rare that state courts rule against a state agency. Make no mistake regarding this 764-mile border-to-border route: Significant potential for impacts to some of the state’s most pristine waters and areas remains. Federal Forest Service staff noted five cars would be a big impact for some primitive, unmaintained roads, which contrary to DNR testimony are not removed.

If you care about our public lands and their future, write to your legislators and the DNR commissioner: Tell them off-highway vehicle projects must be in the mandatory environmental review category.

The writer is a member of the Minnesota Public Lands Coalition.

We want to hear from you. Send us your thoughts here.