These Young Energy Moguls Insist Fracking Is Good For The Environment 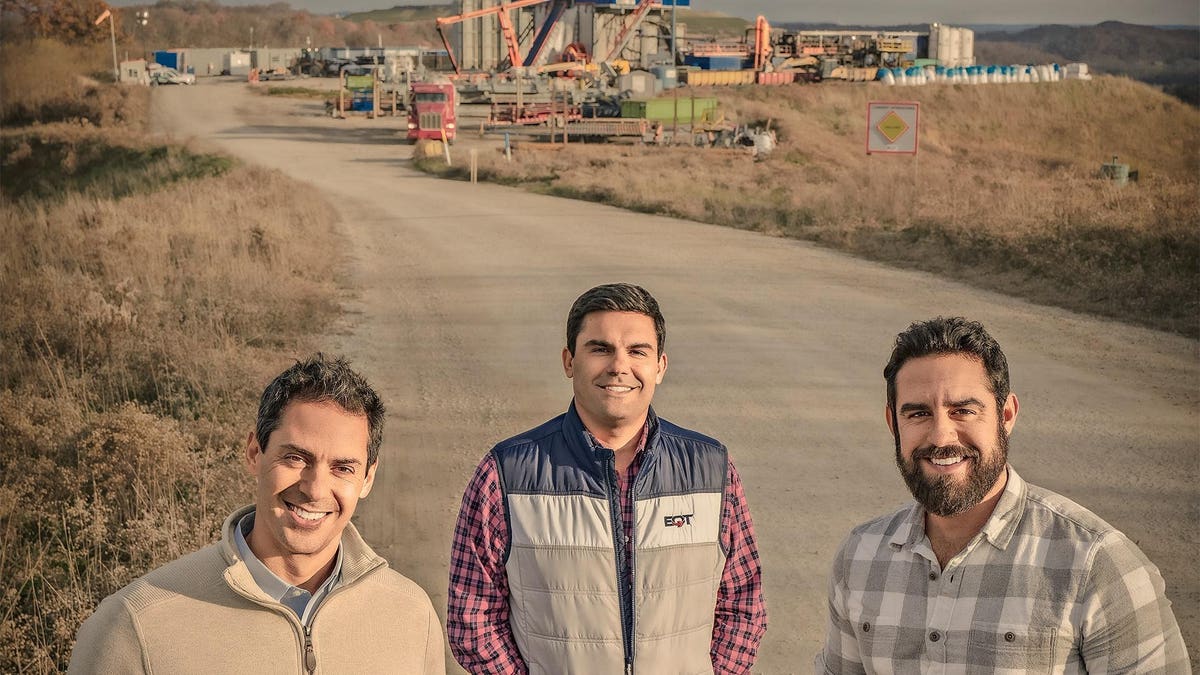 EQT Corp. is a venerable player in the energy business, going back 133 years to the earliest days of gas drilling in Pennsylvania, with headquarters in a granite-and-glass tower in Pittsburgh. But you’d never guess that from a visit to the office of Toby Z. Rice, its 39-year-old chief executive. Rice works out of a converted taekwondo studio upstairs from a state-run liquor store in suburban Carnegie, Pennsylvania, 15 minutes away from the city center. The dojo features a life-sized Iron Man sporting a gorilla mask on its head, graffiti-inspired art and a “Don’t Tread on Me” Gadsden flag.

How did this unconventional Millennial end up running the country’s largest producer of natural gas? By teaming up with family, lucking into the Marcellus shale formation at the right time and making very big bets.

Toby Rice’s partners in gas exploration are his brothers Daniel, 41, and Derek, 36. The capital that launched them was $70 million in loans from a trust fun­ded by their father. They have done well parlaying that stake; the three are now worth more than $700 million.

The Marcellus is a shale deposit stretching under­ground from New York to West Virginia. Fracking technology made this layer of rock valuable overnight, just at the time the brothers were getting into the gas business.

Toby, Daniel and Derek grew up in Boston, living with their mother after their parents divorced. The boys played baseball and learned about business watching their entrepreneurial family of Armenian-immigrant cousins, aunts and uncles. Mom was a caterer, while their father, Daniel Rice III, managed a natural-resources portfolio at BlackRock. He made a windfall in hedge fund performance fees and decided his sons should do something big with it. “He planted the seed in our head,” Daniel the younger says.

But first they had to prepare. Daniel learned about oil and gas at Tyco, Transocean and the investment bank Tudor, Pickering, Holt & Co. Derek became a petroleum geologist, specializing in the new field of drilling shale formations. Toby, an All-American college baseball player who didn’t get drafted, worked as a roughneck on a Texas oil rig making $9 an hour (plus $2 in safety pay if everybody kept their fingers) and quit work on a master’s in hydraulic fracturing when the trio formed Rice Energy in 2007.

This was in the early days of the fracking revolution. There had been one big shale gas field developed at that point, the Barnett, near Fort Worth, Texas. The brothers went after the Marcellus shale of Pennsylvania, as much larger operators like Chesapeake Energy were also starting to lease drillable land there. Toby lived out of his truck, tracking down landowners to make deals to lease property passed over by the big guys.

“I’ve sat at more kitchen tables with more farmers and landowners than any politician in this region,” Toby says. Adds Daniel: “You start layering scraps onto scraps, and suddenly you have room for four wells.” Their dad stopped paying attention to the numbers in 2009, after questioning a $2,300 check Toby had written to the 4-H Club of Washington County, Pennsylvania. He had won a charity auction for a rabbit, outbidding his leasing rival Range Resources. It gets you noticed. “We stormed the basin,” Derek says.

Frackers use steerable drill bits that bore down two miles to intersect a thin layer of hydrocarbon-bearing shale, then turn sideways through the shale layer. After cementing pipe into the hole, the driller uses pinpoint charges to blast holes in the pipe, then fractures the rock by injecting millions of gallons of water mixed with sand down the pipe at high pressure.

The Rice brothers believed in overdoing it—blasting a ton of sand per foot of lateral distance, triple what others used. Shale wells in the Barnett were considered big if they came online at 4,000 MCFs per day. (An MCF, or 1,000 cubic feet, has the energy content of 8.6 gallons of gaso­line.) Rice Energy was cranking out Marcellus wells doing 30,000 MCF per day.

“We were just hoping for something as good as the Barnett. Instead, we were early into the biggest natural gas field in the entire country,” says Derek, who lived in a trailer on rig sites and showered at truck stops. The brothers shared a meal with every new employee and named drilling projects after comic book heroes.

The trio raised $1 billion in a 2014 public offering for Rice Energy, with Daniel serving as chief executive, and another $400 million for a sister entity, a partnership that owned pipelines. Derek says he knew they weren’t smarter than anybody else: “Clearly our peers were going to copy our designs. And then supply is going to go through the roof.” Indeed, gas production out of the Marcellus has exploded, to 35 billion cubic feet (BCF) a day, nearly a third of the U.S. total.

“Mentally we were prepared to run this company forever,” Daniel says, but in 2017 EQT made a generous offer: $6.7 billion in stock and cash, plus the assumption of $1.5 billion in debt. The Rice family got about $200 million in cash and nearly 3% of EQT shares. EQT Midstream Partners acquired the Rice-founded pipeline partnership for another $2.4 billion.

But soon after the deals closed, the Rices started getting calls from unhappy shareholders. Under CEO Robert McNally, EQT had overspent its capital budget by $300 million. It was drilling bad wells where Rice had delivered barnburners. “We gave them their drilling schedule for three years,” Derek says. “They didn’t know what they were doing after three months.” EQT’s share price fell 45%.

Time for a proxy fight. Institutional investors backed the Rice slate of seven board members, who won 80% of the vote. In July 2019 McNally was out and Toby Rice was in. (Daniel is on the EQT board; Derek is an advisor.) The new boss shrank staff by a quarter, to 650, and invested in software and sensors. His Salesforce-enabled dashboard lets him see the conditions of 3,000 wells at 600 locations across 1.6 million acres.

In recent months EQT has acquired Chevron’s Marcellus operations for $735 million and Alta Resources’ for $2.9 billion. Those expansions vaulted the company to daily gas production of 5.5 BCF a day, ahead of No. 2 ExxonMobil.

Big bets are sometimes big mistakes. It’s common for commodities producers to use futures and options to presell production volumes and lock in prices. Toby overdid it with his hedges and was taken aback by this year’s runup in gas prices. His option trades took $3 billion out of 2021’s profits. But after adjusting its hedges, EQT is on target in 2022 to deliver $2 billion in cash flow (net income plus depreciation less maintenance-level capex) on revenue of $5 billion, analysts says. Its shares are up 40% since Toby took over, trailing some industry peers.

Many environmentalists, and a significant number of politicians, would like to put frackers out of business. Look at the numbers, the Rices retort: The shale gas revolution is the biggest reason annual U.S. carbon emissions have dropped nearly 1 billion tons since 2005, as power plants switch from coal to natural gas. Over the same period, China has increased its annual emissions by 4.7 billion tons, with coal use surging. EQT is eyeing the potential to liquefy Marcellus gas and export it out of the Philadelphia area. If that fuel gets to Asia and displaces coal, it will help mitigate climate change.

What about leaks of methane, a greenhouse gas more potent than carbon dioxide? Toby Rice pulls up a dashboard displaying details of a

$20 million program to replace 9,000 pneumatic valves at well sites with electric valves that leak almost no methane. He has enlisted Project Canary, a monitor of industrial emissions, to install the latest in laser-based sniffers. Canary cofounder Chris Romer boasts that these sensors are so good they can tell if a rig worker ate beans for lunch. It costs 2 cents per MCF to certify gas as responsibly produced. But that certification can fetch a premium of 3 to 13 cents per MCF.

“We’re not going after popular things like wind and solar. We’re going after things that make a difference.”

Shares in EQT represent less than a quarter of the Rice brothers’ fortune. Via Rice Investment Group, the three have sponsored two special purpose acquisition companies. “We’re not going after popular things like wind and solar. We’re going after things that make a difference,” Derek says. One of those SPACs was for Archaea Energy, one of the biggest operators and developers of projects to capture fugitive methane that emerges from decomposing garbage in landfills. Catching such gas generates big tax credits, enough to yield $15 of revenue per MCF, versus $5 for regular gas. “We sell a decarbonized energy product to people who have to use fossil fuels,” says Archaea founder Nick Stork, 37. The Rice brothers own a quarter of the shares, worth $600 million.

Naturally, Toby feels he still has something to prove. That will surely require outgrowing the converted taekwondo studio. In his Dodge truck, he takes a visitor on a tour of a rundown mill complex on the banks of Chartiers Creek and Whiskey Run at the heart of Carnegie, the little town named after Pennsylvania’s most famous steel man. With so many mills shut down, its popu­lation is down by a third from its peak, but Toby foresees a revival. He wants to repurpose and rebuild a collection of warehouses and factories, creating spaces where staff will want to come to work even if they don’t have to, where they can help build what he calls a “shalennial” culture. “We will get back to doing lunch with every new hire,” he says.