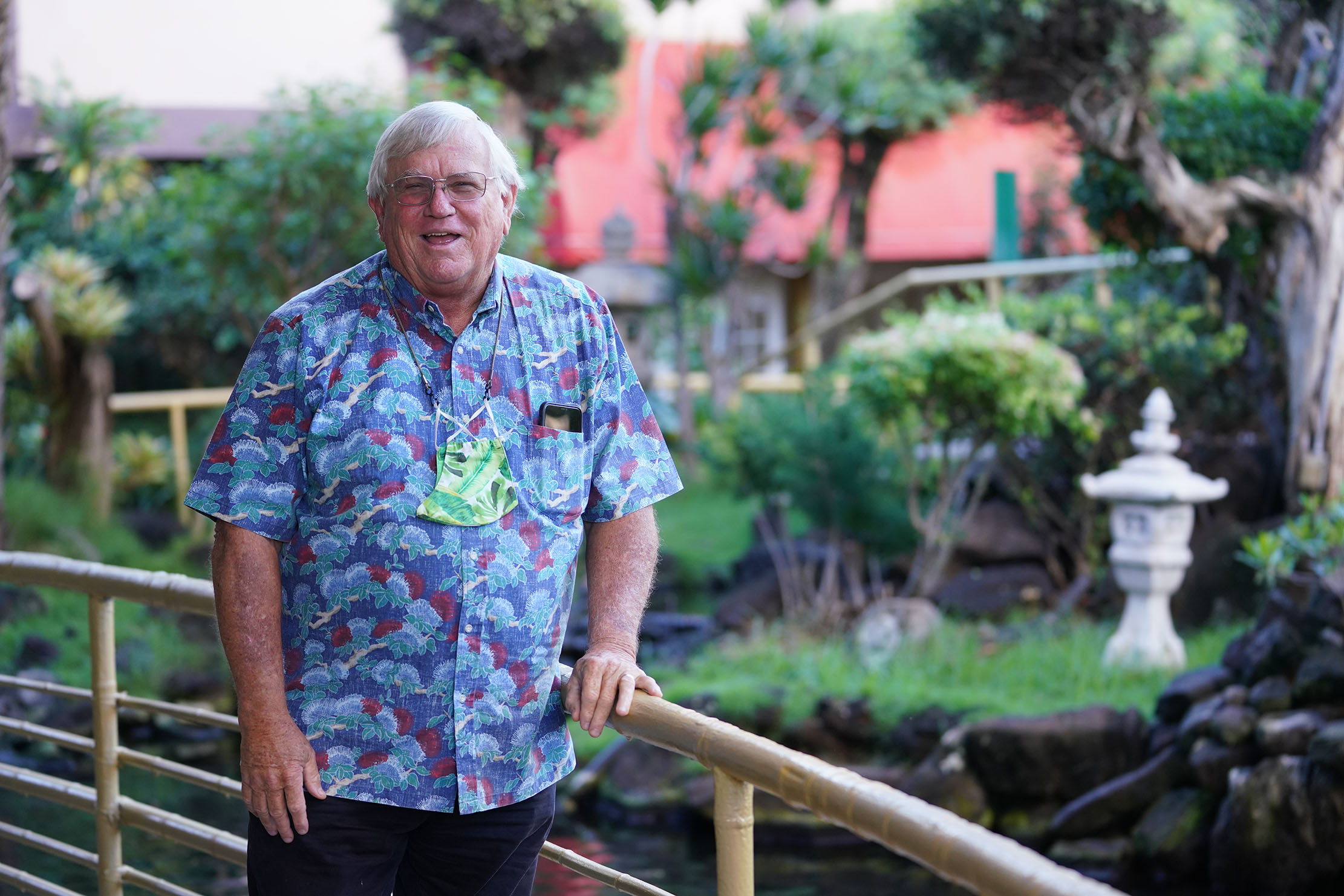 Hawaii-born real estate developer Peter Savio has a reputation for dreaming big. Similar to scenes from fanciful bedtime stories, Savio’s vision for Hawaii’s future goes beyond the blueprints of a typical developer.

While he’s had a long career converting lower-end condominiums and selling properties at lower prices to provide affordable housing in the islands, now he’s expanding his horizons to reimagine ownership of energy and farmland.

Savio, 72, has plans to sell solar panels in the same fashion one sells condominium units and to resell agriculture land at cost to the farmers in the Waialua Farmers Co-Op. More recently, he said he’s considering a run for governor on the Republican ticket.

However, he said he’s sacrificed millions in profits to keep his project costs low so he can provide affordable housing for lower-to-middle income people in Hawaii.

Savio announced last year that he would build a solar farm on land he already owns in Waikele. He said the solar units would be open to anybody for purchase, helping locals build equity in renewable energy.

“People on welfare, people on Section 8 housing can buy into our solar program, and now they could be electric cost free,” he said. Similar to owning a home, Savio said people could rent or sell their solar panels if they plan to move.

But he hasn’t communicated with Hawaiian Electric on any community-based renewable energy project proposal, according to Jim Kelly, the utility’s vice president for government and community relations and corporate communications.

Unlike the solar project, Savio said his plans for the Waialua Farmer’s Co-Op Market are in full swing. On Monday, he said he’s finalizing the purchase of 280 acres from the Dole Plantation — land that was originally leased to workers from the Waialua sugar plantation in the 1990s.

Savio said that farmers were unable to purchase individual fee conversions from Dole, so he’s buying a massive plot and dividing it up to resell “at cost.” He estimates that each acre could sell for about $120,000 but he’s selling it for about half that to keep it affordable for farmers, anticipating a total profit of around $1 million.

“A typical developer could have made a $15 million or $10 million profit on this deal, but it’s not about profit for me,” he said after taking a bite of sweet bread French toast in his usual spot at the Pagoda Floating Restaurant. “I really am a social worker at heart.”

Savio recently sold the Pagoda Hotel to local buyer Rycroft Holdings LLC for an undisclosed amount after he says he experienced revenue difficulties from the pandemic-induced slowdown in tourism.

Savio’s life in real estate began before he was born. His mother established Tropic Shores Realty in the 1950s. By the time Savio was 15, he and his 18-year-old sister Helen Savio owned their first condominium unit at the Waikiki Skyliner.

Savio’s views on home ownership have remained consistent over the decades. They’re also well-documented in columns he wrote for The Honolulu Advertiser in the 1990s with headlines like: “Declining Interests Rates Are Good News” and “Get Ready Hawaii, Buyers Are Coming.”

“While this trend has grown from a trickle to a steady flow, I believe it will continue to increase as more and more mainland buyers use the wealth created by a strong national economy to purchase well-priced assets in Hawaii’s real estate market,” he wrote in 1998. “To paraphrase patriot Paul Revere, ‘The buyers are coming, the buyers are coming.’”

Savio dished out financial advice, encouraging locals young and old to purchase a home instead of renting — an investment he said would build financial security and overall happiness.

“The person who rents will never get ahead,” he said, blaming state policy for fostering a system that leaves locals out of the ownership market, which saw the median price for a house reach $1 million last year.

Some of Savio’s best known projects include the Prince Tower at Queen Emma Gardens, a 334-unit condo conversion; the Rycroft Terrace, a designated affordable project with 162-units; and the Ala Wai Terrace, a former hotel-turned 44-unit residential apartment building.

“He’s a good soul, a kind person and likes to help the underdog,” his sister, Sue Savio, said.

He choked up telling the story of a woman living on Section 8 — the Housing Choice Voucher Program — who, decades later, wrote him a thank you letter for loaning her the down payment for her home. She wrote to him after discovering she would die of cancer in a few weeks and told Savio that she had been able to put her children through school on her own.

But while Savio may view himself as the savior for home buyers in Hawaii, others have a different view.

Savio came under criticism in the mid-1980s for being the lead agent handling the Bishop Estate’s residential leasehold land, which allowed people to own homes for a set period — usually 55 years — and price. During a debate over ending the practice, many older adults and disabled people were reportedly deprived of the opportunity to purchase their property in fee.

The Savio Group, meanwhile, became the largest acting lease-to-fee converter in Hawaii, converting over 26,000 units from leasehold to fee simple ownership in more than 230 buildings.

“I think he’s a phony,” said James Wright, a former trust attorney. “He really was unnecessarily unkind to the lessees when he was doing the Bishop Estate’s dirty work, and it really offended people.”

Savio notes that the property value rapidly increased, benefiting those who were able to buy their properties.

“Everyone should have bought. It was so logical, so obvious, but very emotional for a lot of families, too,” Savio said. “I’m happy to defend what I did.”

Recognizing that the leasehold system was becoming obsolete, Savio began buying up old leasehold properties such as the Diamond Head Beach Hotel, Queen Emma Gardens and Ala Wai Terrace, then selling individual fee simple units for a profit.

Savio’s eldest daughter, Jessica, recalls being bullied by adults in school for her father’s actions. After that, Savio would take her to work with him to show her the business so she would “realize he wasn’t this evil criminal.”

Savio said that looking back, he did a lot more good than harm for the community by creating home ownership opportunities for people who never saw themselves in the position to do so.

Savio also filed for bankruptcy three times in 2001, according to a 2005 article in Pacific Business News.

Savio said he lost his home, cars and offices after lending too much money to people who never paid him back.

A few years later, after spearheading new developments following his bankruptcy, he was able to buy back his home and learned to better organize his financial portfolio. Now, Savio creates a new company for nearly every project to “isolate the liability.”

Savio said that his philosophy is to live in the moment, instead of staying angry at the past. But he hasn’t been immune to challenges that come with obtaining wealth.

According to court documents, Savio has fought many lengthy lawsuits — some ongoing — including a handful filed by old friends and business partners, the Fullard-Leo family, over what Savio describes as misunderstood “handshake deals” of the past.

In 2020, he settled a discrimination case for $80,000 after Savio’s student complexes were accused of unfairly rejecting applicants with children.

“I’ve worked for a few developers and most of them work for a rather large slice of the pie, typically 15 plus percent has to come out of the deal for them to be interested,” he said. “But Peter pays himself a salary, tells his investors I’m paying myself this flat rate for this deal each year and then the rest of it is, you know, profits.”

And while Savio has not formally declared a plan to run for governor, even Democrats seem intrigued by the idea.

“I’m interested to see what he has to say,” said Democrat Jon Yoshimura, a former state senator. “He’s done some unique things in the past trying to solve some of our pressing housing issues, so maybe he has some innovative ideas how to deal with other issues we face.”

Sign up for our FREE morning newsletter and face each day more informed.